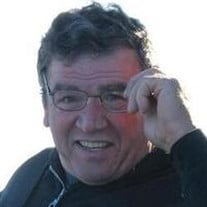 Bradford, VT - William Duval, 68, died on January 3 at his home in Waits River. He was born in Rutland on Dec. 9, 1946, the son of Charles L. and Germaine Duval. Bill grew up as one of ten siblings in Castleton and graduated from Fair Haven Union High School in 1965. He served in the US Navy, on the USS Guam, during the Vietnam War. Bill started his culinary career at the Norwich Inn and later went on to become chef at the Trapp Family Lodge, the Balsams Grand Resort Hotel, and Woodbound Inn. He was recognized as the Chef of New Hampshire in 1984. After heart problems ended his culinary career Bill became a jack-of-all-trades, dealing antiques and working as a handyman throughout the Upper Valley for the last twenty years of his life. He was a devoted father and grandfather whose selflessness, hard work, and Yankee thrift and ingenuity made him a Vermont original. Bill is survived by his four children: Kathryn Duval of Gainesville, FL; Karey Clayborne and her husband Kevin of Trecastagni, Sicily; Jared Duval and his wife Joan of Montpelier; and Juliet Palmer and her husband Josh of Williston; by nine grandchildren and four great grandchildren; and by his friend and former wife, Alice Blackmer of Leesburg, VA. He is also survived by seven of his siblings: Carolyn Aitken of Titusville, FL; Barbara Ettori and husband Tom of Castleton; John Duval and wife Bobbi of Hartford; Henry Duval of Rutland; Michael Duval of Rutland; Joanne Williams and husband Bruce of Poultney; and Jim Duval and wife Sandy of Granville, NY. He was predeceased by his brother Charles Duval II and his sister Charlene Weyrauch. A service in Bill's memory will take place at a later date. Hale Funeral Homes and Cremation Care of Bradford is in charge of arrangements. To view an online guestbook go to www.halefuneralhomes.com To plant Memorial Trees in memory of William Duval, please click here to visit our Sympathy Store.

Bradford, VT - William Duval, 68, died on January 3 at his home in Waits River. He was born in Rutland on Dec. 9, 1946, the son of Charles L. and Germaine Duval. Bill grew up as one of ten siblings in Castleton and graduated from Fair Haven... View Obituary & Service Information

The family of William Duval created this Life Tributes page to make it easy to share your memories.

Send flowers to the Duval family.