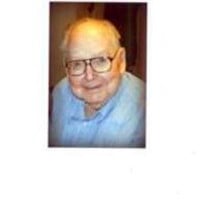 He was born in Philadelphia, PA on August 31, 1922 to Harry and Elizabeth (Standen) Riskie. Bill grew up in Woodbury, NJ and graduated from Woodbury High School in 1938. Following high school he began his long career in banking at the Philadelphia National Bank where he began as an office boy. As a sports lover, Bill enjoyed playing basketball on the bank team for several years. He then joined the US army in 1942 and served in England and France for four years. In 1946 he was discharged having achieved the rank of sergeant. After the war, Bill resumed his career in banking at the Philadelphia National Bank. Also during this time, he attended the University of Pennsylvania receiving a professional certificate in Accounting and Finance. He also attended the American Bankers Association Graduate School at Rutgers University where he wrote a thesis on Equipment Leasing. Bill managed the Equipment Leasing Division of Philadelphia National Bank from 1962-1977 having attained the position of Senior Vice President. His professional memberships included the Robert Morris Associates (national organization of loan officers) and the American Association of Equipment Lessors (past Director) As a well-known advisor in the field of equipment finance, Bill's career continued with stints at the Bank of New Jersey (five years), Bankers Trust Company in New York City (four years), Fleet Credit Corporation of NY (three years). In semi-retirement, he served as a consultant to The Bank of Gloucester County, Woodbury, NJ for six years. In addition to his busy professional life, Bill found time to volunteer in many civic and charitable organizations. He served as a member of the Woodbury (NJ) City Council for six years, followed by four years as a member of the Woodbury (NJ) Board of Education. He was a devoted member of St. Stephen's Lutheran Church (Woodbury, NJ) where he was a past President and long-time Secretary of the Council. He presided over the reorganization of the congregation during the merger of the two parishes which formed St. Stephen's. Bill spent several years as a Trustee and Treasurer of the Mental Health Association of Southwestern NJ. A devotee of big band era music, Bill organized band concerts during the 1980's and 90's as fundraisers for various organizations. Serving as Treasurer and Committee Member for the Woodbury World War II monument was an activity perhaps most near and dear to his heart. The monument was completed in 1996, and Bill could be counted on to be handing out flags each Memorial Day at its location. Bill had a special gift for relating well and kindly to everyone he met. Bill was predeceased by his wife Lucia (Faust) Riskie, his parents, two brothers, Edward Riskie and Harry Riskie, and his long-time beloved companion, Mary (Osborne) Wynn. He is survived by his daughters, Karen (Riskie) Pawluk of West Newbury, VT; and Diane (Riskie) (Krasover) Speight of Barnsley, United Kingdom; three grandchildren, Justin Pawluk of Roswell, GA; Joanna Pawluk of Hartland, VT; and Jenna Krasover of Newport, NH; a great-grandson, Edward J. Pawluk; a sister, Elizabeth (Riskie) Jameson of Sewell, NJ; nine nieces and nephews including H. Ron Riskie, former mayor of Woodbury; and many great nieces and nephews. A memorial service will be held at St. Stephen's Lutheran Church, 230 N. Evergreen Ave., Woodbury, NJ on Saturday, June 29 at 12:00. There will be a calling hour from 11:00 to 12:00 prior to the service, and a luncheon will be held at the church immediately following the service. Memorial contributions may be made either to the Independence Fund (wheelchairs for disabled veterans...independencefund.org) or St. Stephen's Lutheran Church Memorial Fund. The Hale Funeral Home of Bradford, VT is in charge of arrangements. Condolences may be left on the Hale Funeral Home website (halefuneralhomes.com) To plant Memorial Trees in memory of William T. Riskie, please click here to visit our Sympathy Store.

He was born in Philadelphia, PA on August 31, 1922 to Harry and Elizabeth (Standen) Riskie. Bill grew up in Woodbury, NJ and graduated from Woodbury High School in 1938. Following high school he began his long career in banking at the Philadelphia... View Obituary & Service Information

The family of William T. Riskie created this Life Tributes page to make it easy to share your memories.

Send flowers to the Riskie family.