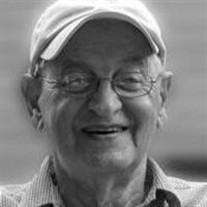 Bill worked for his father in the family fruit store in New Bedford before enlisting in the U.S. Army during World War II. He was honorably discharged in 1946. He returned to New Bedford, and then relocated to Bradford, Vermont in 1954. Bill met his wife of 56 years, Ruth Hathaway, of Bradford, in 1955. They were married on December 30th of that year. In 1957 Bill began work as a teller at the Bradford National Bank. He graduated from the Stonier Graduate School of Banking at Rutgers University in 1969 and went on to serve as the Bradford National Bank's executive vice president through 1975. Bill and Ruth relocated to Essex Junction in 1983 where Bill worked as an internal auditor for the New England Federal Credit Union until his retirement in 2000. During his long career in the banking business, Bill was well known for his deep interest in the people of the community. Always willing to listen to the personal stories, Bill was a compassionate small-town banker who often described the rural economy as "the passing of a single 5-dollar bill from hand to hand." Family and community were central to Bill's life. In addition to his paid employment, Bill served as a volunteer fireman in Bradford, the treasurer of the Bradford Public Library, a first responder on the Bradford Fast Squad, a Sunday school teacher at the Bradford Methodist Church, president of the Vermont Banker's Association, supervisor of cashiers for the Champlain Valley Fair in Essex Junction, VT, and many years of volunteer service to the New England Federal Credit Union as a member of the Supervisory Committee following his retirement. Bill loved to act, sing and dance, finding many years of enjoyment on stage as a member of the Mamas and the Papas variety show in Bradford. He was an avid amateur photographer whose cameras were always close at hand as he recorded images of Vermont and her people during his retirement years. Bill could often be found displaying his photographs at the local Vermont fairs, which he loved. Friday nights were a time to gather at a local establishment where Bill generously passed out smiles to all who joined him. Bill's character and deeply felt connections were central to the family's strength. He had a penchant for storytelling. His many anecdotes served as both family entertainment and a chronicle of family history. He believed that a sense of humor is an essential human quality. His served him well. Bill is survived by his daughter, Cheryl Rose (Burlington), son, Kevin Rose (Tunbridge), daughter, Glenda Rose (Johnson), and daughter, Melanie Loschiavo (Bradford), along with 9 grandchildren and 7 great grandchildren. Memorial services are planned for 1 pm on Saturday, January 5th at the United Methodist Church in Bradford, Vermont. Donations may be made in Bill's name to the Visiting Nurse Association of Chittenden and Grand Isle Counties, 1110 Prim Road, Colchester, VT 05446. The Hale Funeral Home of Bradford, VT is in charge of arrangements To view an online guestbook go to www.halefuneralhomes.com To plant Memorial Trees in memory of William Rose Jr, please click here to visit our Sympathy Store.

Bill worked for his father in the family fruit store in New Bedford before enlisting in the U.S. Army during World War II. He was honorably discharged in 1946. He returned to New Bedford, and then relocated to Bradford, Vermont in 1954. Bill... View Obituary & Service Information

The family of William Rose Jr created this Life Tributes page to make it easy to share your memories.

Bill worked for his father in the family fruit store in New Bedford...

Send flowers to the Rose family.