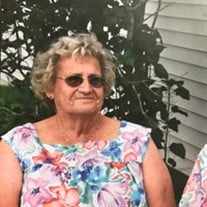 Piermont, NH- Winona Joyce Robie, 87, of Piermont, NH died December 16, 2016 at her home surrounded by her loving family.She was born Winona Joyce Emerson the daughter of Clinton Fifield Emerson and Lena may Crosby in Newbury, VT on December 27, 1928. She attended Newbury Elementary School and was a graduate of Newbury High School.She married Freeman Ellis Robie of Piermont, NH on June 30, 1945, they started they married life in Conway, NH where Freeman was employed by Shumway Marshall delivering bottled milk. In 1946 they moved back to Piermont when Freeman began the job as herdsman for Stephen Underhill. In 1952 they purchased the Robie farm on Route 10 in Piermont where they built up an impressive herd of registered Holsteins and raised four sons, Terry, Lyman(Lee), Timothy and Todd. "Noni: was a devoted mother and homemaker and did her share of field work, driving tractors and machinery as well as tending to a large garden and strawberry patch, canning and harvesting and was well known for how fast she could cook a tasty meal and have it on the table for the farm crew in no time flat!!, she did draw the line at milking cows and warned her daughter-in-law to do the same but was frustrated when she didn't listen! She loved to go dancing every Saturday night and didn't want to ever miss a party. She treasured being a great grandmother and cradling new babies.She was a active member of the community as a 4_H Dairy Club Leader, member of the Christmas Club, Woman's Fellowship and a charter member of the infamous "Watch em Pops". After the Barned burned in 1976 Freeman and Noni traveled much of the United States and wintered in Florida where she enjoyed playing golf and socializing with a community of very close friends.She is survived by Freeman, her loving husband of 71 years; sons, Terry Robie and wife Cheryl, Lee Robie and wife Betty Sue and Todd Robie, grandchildren, great-grandchildren, as well as a host of friends and extended family. She was predeceased by one son, Timothy in 1971, grandson C. Freeman Robie in 2016 and her sisters Buelah LaBay and Emily Gilson.A celebration of her life will be held on May 20, 2017 at 3 pm in the Piermont Congregational Church. There are no calling hours. Burial will be private and held in the family lot in the South lawn Cemetery.The Hale Funeral Homes and Cremation Care of Bradford, VT are in charge of arrangements[GH1].To view an online guestbook go to www.halefuneralhomes.com[GH1] To plant Memorial Trees in memory of Winona Joyce Robie, please click here to visit our Sympathy Store.

The family of Winona Joyce Robie created this Life Tributes page to make it easy to share your memories.

Send flowers to the Robie family.